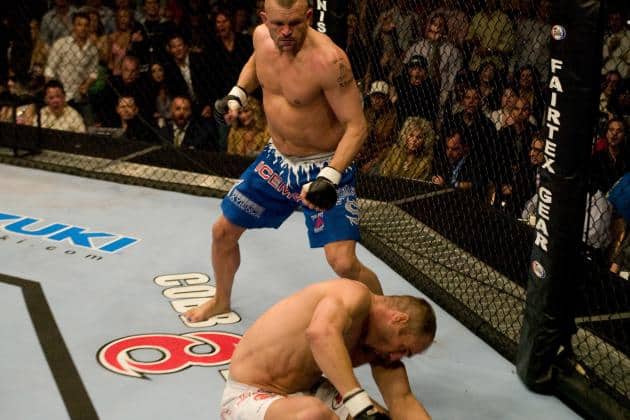 After weeks of coaching against one another on the first season of The Ultimate Fighter reality show, former UFC lightweight champ Randy Couture would defend his title against Chuck Liddell in a massive main event at UFC 52.

Couture had just won the title back after stopping then-champion Vitor Belfort in their title bout at UFC 49 via doctor stoppage, and had won three of his last five bouts in the Octagon.

Liddell was riding high off of two straight knockout victories over Tito Ortiz and Vernon White, and had his sights fixed on the 205-pound strap that rested around Couture’s waist.

When the bout got underway the two engaged in a heated exchange of shots and Liddell dropped Couture with a nasty right hand to the chin. Liddell then immediately swarmed on the downed Couture before the referee pulled him off and waived the contest off.

Liddell would win the UFC light heavyweight title for the first time in his career and would begin his reign as one of the greatest 205-pound champions the promotion has ever seen.