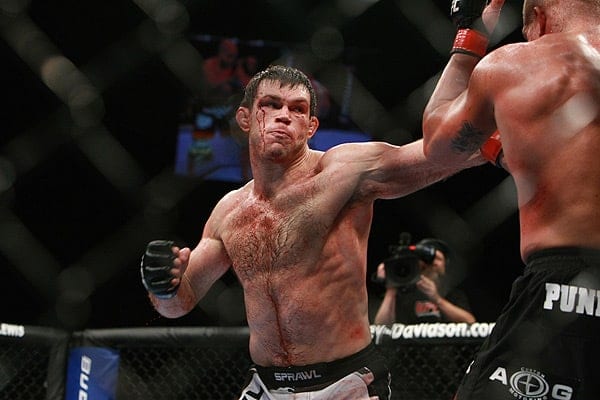 Prior to Mauricio Rua’s UFC debut at UFC 76 in September 2007, “Shogun” had torn through Pride in devastating fashion. He won the 2005 Pride Middleweight Grand Prix by bludgeoning Quinton Jackson, winning an epic battle with Antonio Rogerio Nogueira, and then stopping Alistair Overeem and Ricardo Arona in the same night. Rua was one of the most feared fighters on the planet, with a blend of elite athleticism and lethal Muay Thai, and it was expected he would quickly march his way to a title shot after the UFC acquired Pride.

In his path stood Forrest Griffin, the winner of the inaugural season of The Ultimate Fighter. Griffin was popular and skilled, but after disappointing setbacks to Keith Jardine and Tito Ortiz, few thought he would reach the upper echelon of the division.

Griffin gave as good as he got from the outset, though. The two light heavyweights traded leg kicks, punching combinations, and takedowns. Surprisingly, Griffin did his best work on the ground against the BJJ black belt. When taken down, he mostly nullified Rua’s attacks from guard, and in top position he landed good punches as Rua repeatedly gave up his back.

By the third round Rua was exhausted, while Griffin maintained the same torrid pace. With time winding down, Rua again gave up his back, but this time Griffin sunk in his hooks instead of merely punching from one side. He flattened out the former Pride star and wrapped up a rear naked choke, forcing the tapout and completing the most unlikely victory of his career.