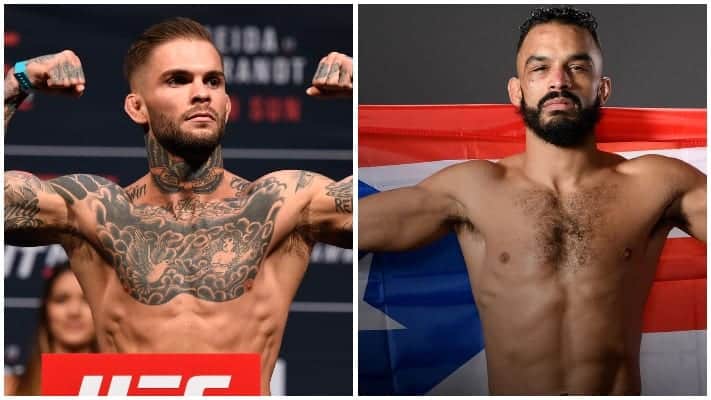 There is something special about being able to look forward to the big game, or the next fight that you know will hit the headlines. In the UFC, this matters just as much, and with less than a month to go until Rob Font takes on Coby Garbrandt, people are starting to pay attention to this particular match-up.

As of February, Rob Font is ranked the third in his bantamweight division, which imposes a body weight limit of between 126-135 lb. Garbrandt, four years younger than his opponent, is only one place down the rankings. This suggests an interesting duel between two opponents who will feel they have every chance of coming out on top on the night.

Both fighters will be running with an orthodox stance, but the reach of Font is likely to play to his advantage. Although these opponents have the same height, the longer reach of Font, by more than six inches, means he will be able to pull off more shots unless Garbrandt is prepared to alter his positioning to try and counter this extra threat.

As far as the betting odds go, Font is considered the clear favorite right now. This can be put down to a number of clear factors – not least the fact that Garbrandt is still coming off a poor run since he was at the top of the Bantamweight rankings a few years ago, with three losses in the last couple of years contributing to his slide down to fourth. Font will fancy his chances here, knowing a solid victory will cement his place in the rankings and also give him a chance to push towards second.

That said, Garbrandt has faced bigger fights than Font has, and this is where the decision-making on the betting can get interesting. Garbrandt went in to a few title fights underprepared and he suffered three losses in a row, but he will have licked his wounds in the period since and seems determined to come back and try hard to hit those previous heights.

On the other side of this battle, Font has not exactly been picking the most challenging combatants in previous bouts. There is a sense that although he did win as an underdog in his last bout against Marlon Moraes, being impressive in victory, he needs to dominate here to be seen as being worthy of being talked about as a great in the Bantamweight stakes.

Garbrandt will be looking towards this battle as something of a chance for redemption, given that since being top of the Bantamweight stakes in late 2016, he has been on a downward spiral that has not helped his ability to be taken seriously as the favorite. A back injury weakened his ability to fight back and push off his opponents from potential knockout positions, but it seemed as if he started to mentally struggle with a weaker body condition.

In 2017, he lost his first professional MMA fight to a knockout decision, and then the next one came straight after. He dropped out of the UFC Bantamweight Championship and looked to stage a recovery but lost his next fight as well. After scrapping his planned comeback late last summer due to problems around COVID-19, this fight will be seen as a redemption opportunity even if he will serve as the underdog on this card.

With Aljamain Sterling the current holder of the Bantamweight belt, both fighters will be coming into this event hoping to be sharp and aiming to find a way to demonstrate they are capable of competing at that very top level in this weight class.

Font has won his last three in a row, having also grabbed the Fight of the Night accolade for his December 2019 victory against Ricky Simón. He also has a reputation for being something of a cautious fighter compared to Garbrandt, but this could well place him in a handy position to win given that he is the favorite. Font does not need to come out with his arms swinging from the first minute and that is not his style, so he will look to use his longer reach to pick off his opponent bit by bit.

Assuming that Garbrandt lacks the potent mix to take Font down immediately, since they will not be expected to go toe to toe from the first minute, it could well be a struggle for the Ohio-born fighter to get the upper hand and dominate the match. Another reason Font can be backed in this battle is that he has been able to demonstrate his literal ability to take punches on the chin in the past. This ability to take a knock and carry on means he is unlikely to be taken down without something special.

That said, it is not like Font is unbeatable. He has lost four fights in professional MMA, and he definitely has weaknesses. Whether Garbrandt has the means to take him down is another matter. A particular aspect that could make this interesting is the boxing backgrounds of both fighters, so we are unlikely to see more of the mixed side of martial arts in this game with both of these players usually opting to stay on their feet where possible.

This could also tip it in Garbrandt’s favor if he can mix it up and provide a few surprises. The former champion, now fourth in the Bantam rankings, will certainly have a point to prove – and since many are not backing him right now, he could see this as extra motivation. At the moment, the bookmakers are leaning towards Rob Font coming out victorious, but it is worth seeing in the pre-match build-ups as we move into May if some of these expectations change and we see a fighter ready to push for the Bantamweight belt once more.