LowKickMMA.com
Home Editorials OPINION | Sarah Kaufman – Is There One Last Hurrah for the... 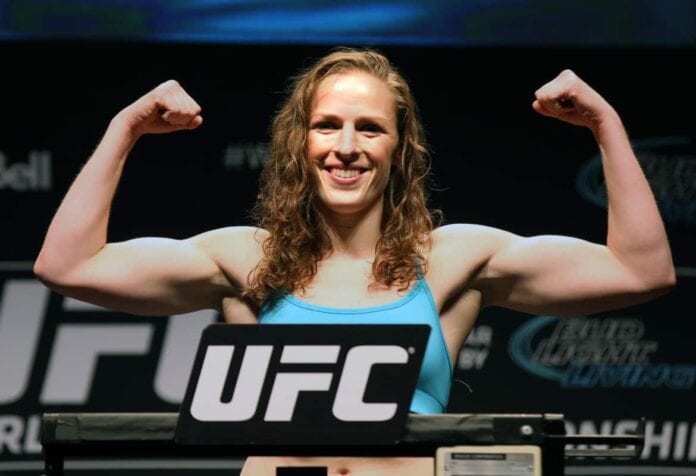 Sarah Kaufman has never been knocked out in a 27-fight career, has operated under the banner of no less than five of MMA’s largest organizations and has fought against the likes of Miesha Tate and Ronda Rousey.

So just why is it that the British Columbia native Kaufman does not get the plaudits she deserves, despite still being rated as highly as the number 4 ranked fighter at 135-pounds and number 8 in pound-for-pound lists?

In this article we look at the ebbs and flows of her MMA career and cast an eye into the future to see if there’s one last night of glory left for a woman who has lasted in this most brutal of sports for an incredible 13 years.

Kaufman first burst onto the mainstream fan’s radar all the way back in 2009, when she was brought in as a late replacement to take on Miesha Tate. Despite being the betting underdog, Kaufman dominated and won by a wide decision.

It was the first time anyone had extended her the full distance in a fight and was the battle that hardened her for future wars in the octagon.

Coming Up Short Against Ronda Rousey

Having suffered her first defeat as a professional to submission specialist Marloes Coenen, Kaufman roared back into contention to claim a shot at one of the biggest names in the game at the time, Ronda Rousey.

Kaufman took Rousey and MMA fans in general by surprise by launching a pre-fight verbal tirade. It was a move obviously designed to try and get Rousey to abandon her takedown game in favor of slugging it out where Kaufman was more comfortable. Unfortunately, this approach appeared to turn fans against her, especially seeing as she would lose to an armbar submission.

Surviving a Car Accident and the UFC

Having once again rebounded from the Rousey defeat, Kaufman joined the UFC which had since acquired her previous employer Strikeforce.

The period of her career spent with the UFC was stop-start to say the least, with her promises of highlight-reel KO’s never really coming to fruition.

Truth be told, it seemed she never quite saw eye to eye with Dana White, which was perhaps how this British Columbia native’s odds of success faded over time.

Her fate was then sealed by an unfortunate car crash near her home town, which saw her ruled out for the best part of 12 months before losing back-to-back fights for the first time in her career.

Is There a Way Back to the Big Time?

Having licked her wounds and plotted her return, Kaufman made a run at trying to win the $1m prize available in the Professional Fighters League, only to fall short in the semi-finals despite having a distinct weight advantage over her opponent, Larissa Pacheco. However, it would be a brave man or woman who writes her off in the future.