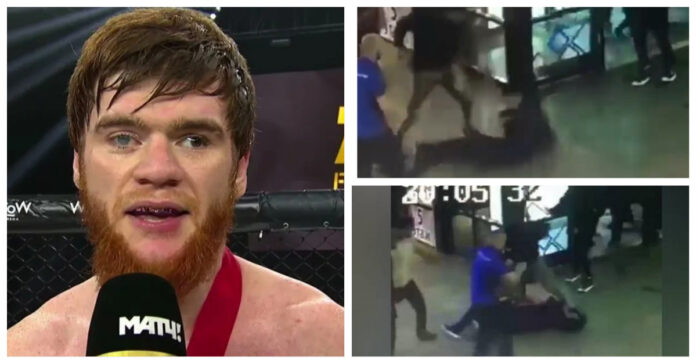 ‘The Golden Boy’ is coming off an impressive first-round finish of Rodrigo Carlos by TKO in February. Magomedov has remained undefeated in eight bouts as a professional mixed martial artist. He also maintains a 100 percent finish rate with all of his victories coming by way of knockout or technical knockout.

Dagestan district police arrested the Russian MMA fighter after he brutally assaulted a man in a mall. The man was reported with his girlfriend in front of Magomedov on an escalator when the fight broke out. Magomedov took issue with the couple showing public displays of affection and confronted the couple when they kissed.

This led to an argument between the rising prospect and the man, after which the situation got much worse. Initially, they were trading shots coming down the escalator but Magomedov was not happy with that.

He waited outside for the man and proceeded to sucker punch him in the face. The man lost consciousness and dropped to the floor only for Magomedov to stomp on his head before others intervened to help the fallen man.

You can watch the video of the incident below.

“The two did not contact the police, as did the witness who predicted the incident,” the Dagestan police said in a statement.

Magomedov breaks silence on the incident

The Russian MMA fighter Magomedov was reported to have reached an agreement between them but they will be prosecuted for charges of “hooliganism and disturbing public order” with the security footage obtained from the mall as evidence against them.

“One has to understand the situation, in Makhachkala there are unwritten rules, a kind of moral code of our own. In Moscow it is acceptable (meaning the couple who kissed before him), but with us it is not acceptable. I could not shut up”.

“If it was a tourist or a stranger then you could just ask him to stop. I just wanted to tell him he was not behaving properly but I could not convey my message. He took it wrongly, there’s also a matter of pride – he hit me. It was unexpected, I suggested we talk about it – but he hit me. My last blow was definitely not necessary.” (h/t Sport1)