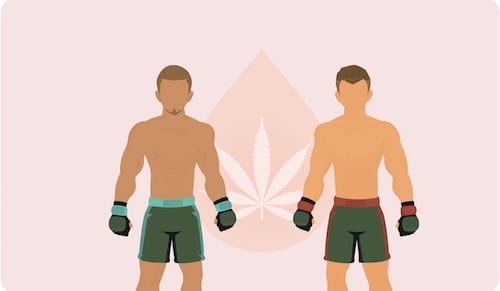 There are various ways to use cannabidiol. For years, CBD oil was the primary option, although edibles were also widely available. Then, brands began getting bolder and more innovative as they saw the market grow. Suddenly, consumers had access to products such as CBD honey, CBD coffee, CBD chocolate, and an array of vape devices.

MMA fighters may use CBD oil though many of them enjoy the relatively rapid effects of vaporizing the cannabinoid. Indeed, Nate Diaz did when he famously used a vape pen with CBD during a post-fight press conference in 2016.

However, rather than merely trying CBD oil in the MMA, fighters are discovering the benefits of CBD topicals. These are creams, salves, ointments, and balms infused with the cannabinoid.

Why Do MMA Fighters Use CBD Topicals?

There is science behind the usage of topical products such as CBD cream. All mammals have an endocannabinoid system (ECS). We produce natural cannabinoids that interact with cannabinoid receptors (CB1 and CB2) and also create enzymes that break down the cannabinoids.

CB1 receptors are generally found in the brain and central nervous system. CB2 receptors have a greater connection to the immune system. While most cannabinoids bind to both types of receptors, CBD doesn’t directly trigger either one. Instead, it modifies the ability of receptors to bind to cannabinoids.

CBD also influences other receptor types in the ECS. Therefore, it could improve a person’s natural endocannabinoid production through the occupation of specific enzymes.

MMA fighters try CBD topicals to help soothe their aching muscles and joints after a fight or training. Once you apply the cream, the cannabinoids penetrate the skin and get to work on the site of the injury. CBD has potent anti-inflammatory effects, which is hugely beneficial to MMA combatants.

Most topicals contain extra ingredients such as vitamin E, jasmine, and camphor, which benefit your skin’s health overall.

Aurora Cannabis is now a partner of the UFC. In 2019, the two entities combined to test the effects of CBD topicals on MMA combatants. The research aims to check out the cannabinoid’s effect on fighters. According to the UFC, the investigation will help it look at injury, pain, inflammation, care, and recovery amongst its members.

Initially, 30 UFC athletes signed up for the trial, which is being led by a research scientist from the University of Alberta. The UFC’s vice president of performance, Duncan French, said that the aim was to apply science and see where it leads. He also stated that he hoped the studies would provide clarity and finally determine the effectiveness of CBD derived from hemp on the health of athletes and their recovery from injury.

Earlier in the year, the NHL Alumni Association co-sponsored a study of the effects of CBD on 100 former players with brain trauma.

We certainly live in an exciting era of research, and hopefully, the results will prove that CBD oil and MMA are a good mix. For years, professional sports associations in America have tried to keep CBD banned. However, most of them, even the famously anti-CBD NFL, are finally changing their tune.

What Do MMA Fighters Say About CBD?

Bas Rutten was a great fighter and a former MMA champion. Like many sports athletes, he was addicted to opioids at one point in his career. Rutten said he knew he had an opioid addiction problem after his last bout in 2006. Several weeks before that fight, a career laden with injuries came back to haunt him, and he was in severe pain.

To cope with the agony and ensure he was ready for his bout, Rutten said that he quickly developed a dependence on pain pills. According to the fighter, one pill quickly becomes four, then ten. Before you realize it, you are taking incredible amounts of opioids.

When he went to see a doctor, he was told that the Tylenol in drugs like Vicodin was terrible for the liver. The physician recommended using oxycontin instead! According to Rutten, the drugs don’t do much for pain after a while, and he was only using them because he was addicted.

Fortunately, Rutten was one MMA fighter who saw the light, and he was amazed by the results when he switched to CBD. Today, he is a vocal proponent of CBD as an anti-inflammatory and urges people to use it instead of opioids. He believes that if cannabidiol were available during his career, he would never have become addicted to opioids.

These days, MMA fighters are aware of what CBD can do for them and place their faith in brands like Premium Jane. It is one of the industry’s top-rated brands and sells a wide range of CBD topicals. These include salves, rejuvenation cream, and facial cream.