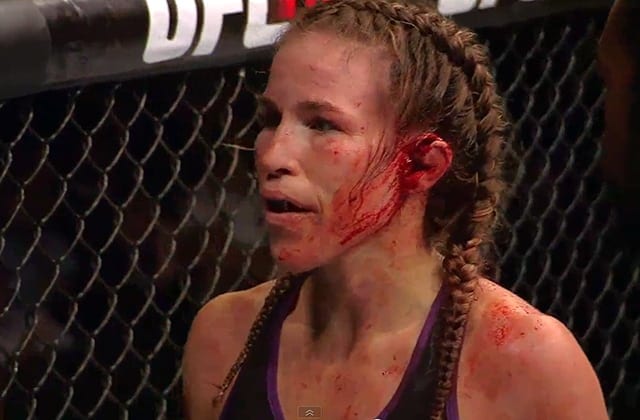 Although UFC women’s bantamweight Leslie Smith was forced to succumb to a gruesome exploded ear in her last fight against Jessica Eye at UFC 180, a recent harasser outside of a San Francisco club didn’t fare as well.

According to a Facebook post from Smith’s trainer Cesar Gracie, Smith and TUF 20 alum Heather Jo Clark were entering a San Francisco nightclub with a group of friends when an unidentified man grabbed a friend’s behind. When Smith was informed of the alleged action and confronted the man about it, he supposedly got mouthy and decided to take a swing at Smith. Not surprisingly, it didn’t work out too well for him:

“Dirtbag decides to sexually harass group of females. What he didn’t know was that 2 of the women were MMA fighters currently in the UFC.

While going out to a club in San Francisco, a malcontent male decided to cop a feel of a female entering the club. The female turned to her friend, current UFC fighter, Leslie Smith and exclaimed, “that guy just grabbed my a$$”. Leslie approached the man and said, “hey you can’t do that” at which point the larger male responded, “[email protected] you I can do whatever I want”

At this point the man became irate and spat on Leslie’s face. He then proceeded to take a punch at what he thought would be an indefensible woman.

Leslie ducked the punch and shot in for a takedown. She quickly got to the mans back and applied a choke but decided he needed some elbow strikes and punches to learn a valuable lesson. The man unable to fend off the better fighter, desperately grabbed at Leslie’s hair and in vain resorted to fighting like a girl.

Heather, without missing a beat, delivered a running soccer kick to the man’s nether regions.

Leslie again achieved mount and delivered a series of elbows until the man, now having his face looking more like hamburger meat, yelled out that he was sorry and that he respected them. At this point Leslie disengaged and allowed the man to get up and go. He left having learned a valuable lesson and the women returned to the club.”

Brutal. Now the man will most likely have a completely different side of the story if and when this case goes to court, but Smith soon spoke up with her part:

“I’d be second guessing myself and my judgment if I had been drinking but I wasn’t. I can’t say I would be able to avoid the violence if given the chance to play it out. I was morally compelled to tell the man that my friend’s butt (in a pair of jean btw) was not public property for him to grope at will and then he spit and swung on me. I feel like I stuck to my policy of non initiation of violence while also standing up for what I know is right.”

“Thanks everyone, I never meant to fight him but I couldn’t let my friend get disrespected like that and he escalated it from there. I make mistakes but I try (and sometimes fail) to live by a policy of non initiation of violence.”

It sounds like Smith was none too happy to get into a public altercation with a civilian, but she supposedly had no other choice when she was spat and swung at. If the details of the sordid case are indeed true, it’d be tough to blame her for defending her friend and then reacting how she did when she was physically threatened with violence.

Considering that it sounds like Smith had the situation fully under control, the running soccer style kick to the nuts from Clark might be a different story, however.