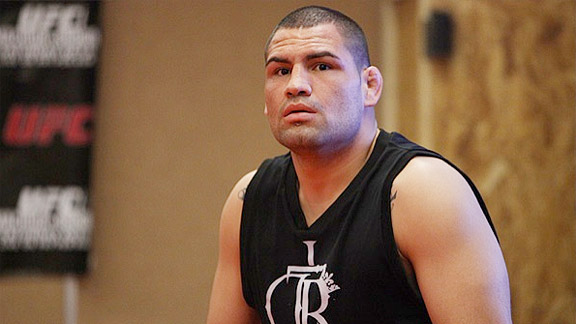 Jon Jones has put together an extremely impressive run in the UFC light-heavyweight division; from snatching the title against Shogun Rua to become the youngest ever champion, to defending the belt seven times-‘Bones’ is rapidly becoming the most dominant champ the promotion has ever see. But the young gun’s time at 205 pounds will not last forever.

I’m talking more specifically about Jones moving to heavyweight, as opposed to him losing anytime soon, and the inevitable move to heavyweight would create a whole new set of challenges for JJ. For starters, those guys hit very hard, especially Cain Velasquez. Daniel Cormier and Velasquez’s trainer Javier Mendez had his say on the situation while talking with MMAFighting:

“Jon will definitely pose some problems for Cain, but Cain’s going to pose more problems for Jon that he’s never faced in his whole entire life.”

Obviously a trainer is never going to say he feels his man would be bested, so it would be surprising to hear Mendez say anything different. That being said, it would be foolish to think that Jones wouldn’t be taken down at least once by Velasquez in a heavyweight fight. Jones’ reach and height would still play a big role in the striking department, but could the same be said for a 205-pound fight against Cormier?

Although DC holds incredible wrestling credentials, would he give up the strength by fighting at lhw? Getting inside Jones’ reach is easier said than done, as Glover Teixeira found at UFC 172, but both Cormier and Velasquez are much faster on the feet. The question is what would Jones do from his back against either man?

‘Bones’ has a decent chin, and took some big shots against GT, but durability wouldn’t win you a fight against Velasquez; just ask Junior dos Santos. I’m intrigued to see if Jones can hang with the big boy, and we may only be two fights away from finding out. A win over Gustafsson would probably mean that Cormier would be JJ’s last bout at 205; win or lose.