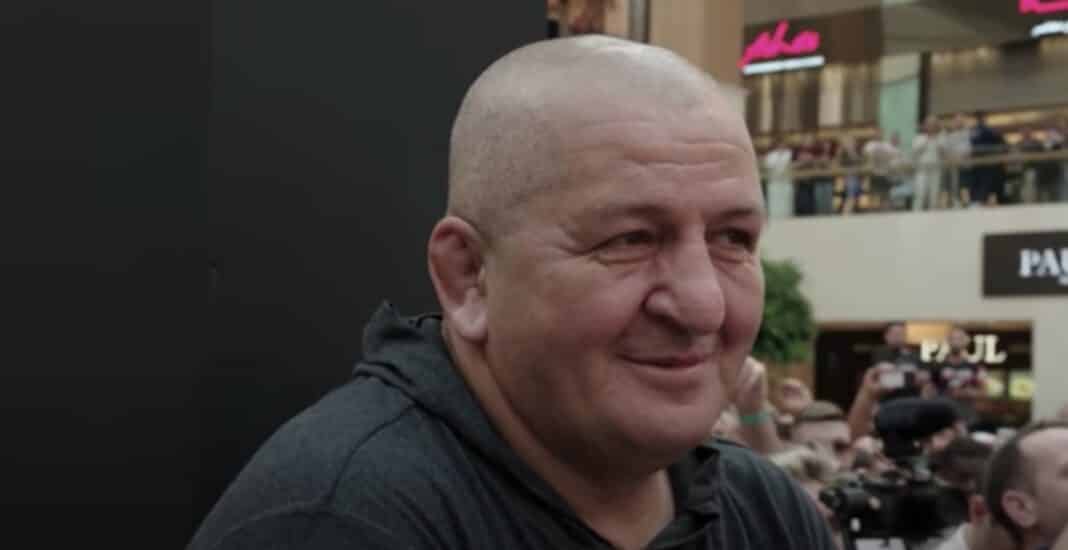 The Daghestani native grew up doing freestyle wrestling like many in the country would do. Abdulmanap Nurmagomedov would spend his entire childhood wrestling and earn a national title in his teens.

Once he was of age, Abdulmanap had to do his service in the Soviet military. Once in the military, Nurmagomedov discovered the sports of Judo and Sambo.

With his wrestling background, Abdulmanap Nurmagomedov would quickly jump into these martial arts and immediately excel at them. So much so that he became a national level in both sports. Winning championships in both disciplines.

After serving in the military and graduating from the Poltava University of Economics and Trade would continue competing in those sports.

He was a skilled competitor, but Abdulmanap Nurmagomedov found his true calling as a coach.  Helping his brother Nurmagomed win a national championship in 1992 for the Ukrainian national team. This would mark the beginning of the greatest Sambo coach that had ever lived.

After helping his brother win a national title, AbdulmanapnNurmagomedov would move back to his home in Dagestan. Once he was there, he began coaching at the Manapov school and elevated the already successful school.

Dagestan was already filled with numerous athletes that excelled in wrestling. Abdulmanap Nurmagomedov was able to hone their skills and put Dagestan on the map in Sambo. Leading numerous Sambo athletes to championships under his guidance.

When MMA began to get popular, Abdulmanap Nurmagomedov made the natural transition to coaching MMA. He was already a highly recognized Sambo coach and quickly became a renowned MMA coach.

Abdulmanap Nurmagomedov would get global recognition when his son Khabib was becoming the world’s best MMA fighter. Training numerous Sambo and MMA fighters out of Eagles MMA in Dagestan.

He would coach 7 fighters that would make it to the UFC and Bellator. With the best of them being his son, Khabib, who would win the UFC Lightweight title.

He was transported from a hospital in Makhachkala to a hospital in Moscow. His condition rapidly declined and Abdulmanap would tragically succumb to the illness on July 3rd, 2020.

The loss devastated the MMA and Sambo communities that are still mourning his loss a year later.

In over 30 years as a martial arts coach, Abdulmanapm Nurmagomedov trained countless champions in Sambo, Judo, wrestling, and MMA. Here are some of his more notable MMA fighters.

Abdulmanap Nurmagomedov’s son Khabib is arguably one of the best MMA fighters there has ever been. From the time he was born, Khabib was groomed to be a champion.

His father started his wrestling and Judo training from an early age. Even having him wrestle bear cubs when he was a kid.

Khabib would enter into MMA around the same time that he got into combat Sambo. In between winning his first 5 pro MMA fights, Khabib would win 2 world combat Sambo titles in 2009 and 2010.

He would continue winning all of his MMA fights within M-1 and ProFC before getting into the UFC. In 2012, Khabib made his UFC debut submitting Kamal Shalarus by RNC in dominating fashion fans would become accustomed to.

In his next 9 fights, Khabib would continue to beat his opponents without much resistance. Marking his 26th win by winning the vacant UFC Lightweight championship.

This would set up a grudge match between Khabib and former champion Conor McGregor. It would be the most dominant performance of his career submitting the former champ in the 4th round. Unfortunately the riot Khabib started after the fight overshadowed his performance.

After the Conor fight, Khabib would defend his title against Dustin Poirier. Unfortunately a year later, Khabib would be devastated by the loss of his beloved father before his match with Justin Gaethje.

Upon beating Gaethje, Khabib would retire from MMA. Keeping a promise to his mother to stop fighting.

The next big thing to come out of Eagles MMA and AKA is Islam Makhachev. Islam started training with Abdulmanap and Khabib when he was a teen and looked to be a great prospect.

He would make his pro MMA debut in 2010 and win his first 11 fights before getting into the UFC in 2015. Makhachev would win his debut, but lose his first fight by knockout 5 month after his debut.

From that loss, Islam has been slowing growing into a top fighter in the UFC lightweight division. Since that loss, Makhachev has gone 8-0 and is looking to earn the title that Khabib once held.

Khabib’s relative  Usman Nurmagomedov is one of the biggest rising talents within Bellator MMA. Before getting into the promotion, Usman much like Khabib dominated his competition in Russia.

Easily winning all of his 11 bouts before signing with Bellator in late 2020. Usman in Dagestani wrestler fashion would dominate his first two opponents in the promotion.

He is now working his way towards a shot at the Bellator welterweight title.

He may not be with us anymore, but Abdulmanap Nurmagomedov’s legacy is still alive and well. Abdulmanap holds the Guinness record for being the winningest Sambo coach of all time. With over 19 Sambo world champions that trained under him in his 30+ years of coaching.

Nurmagomedov trained his son Khabib to be one of the most dominant champions in MMA history, who is continuing his work.

Now that Khabib is retired, he is following in his father’s footsteps and has become a head MMA coach. As of now, Khabib is undefeated as a coach and will look to grow world champions just like his father.