Nicknamed “El Conquistador”, UFC veteran Jorge Rivera will look to conquer another opponent, this time facing the Legionarius Alessio Sakara in the co-main event of UFC 122 this weekend. Thirty-eight years old, Jorge Rivera holds a Mixed Martial Arts record of 18 wins and 7 losses (8-5 in the UFC), finishing 12 of his fights via a TKO/KO. Rivera is coming off three consecutive victories, with his latest victory coming via TKO against Nate Quarry at Fight Night 21.

Here’s what Jorge Rivera had to say in an exclusive interview for LowKick.com Community. Enjoy!

What kind of gameplan do you prepare for Alessio, and how do you rate his striking game?
I feel like I’m prepared for everything. It’s MMA so I have to be well rounded. He’s a stand up fighter, so I think he’ll like to keep it there. Fine with me, coz that’s what I’ve been doing my whole career. As for his striking, I think it’s one of the best in MMA, for sure. He was a professional Boxer. He has a great left hook. Fast straight right hand. It’s hard to deny it.

Sakara presented by the UFC as a “World Class Striker”, while you actually have more KO wins on your record. Do you agree with that statement?
It’s a matter of opinion. Like I said, he’s a great striker, but I don’t know about him being a “World Class” striker. If he was a world class striker, he would be in Boxing. For MMA he’s a great striker, but a world class? It’s a bit of a stretch.

Alessio Sakara is a Brown Belt in BJJ. What will be your answer if he decides to take this fight to the ground?
I have no problem with that. I train with a great BJJ guys as well. I have Tim Burrill in my team, who’s a Black Belt under Carlos Machado. I train with so many good BJJ guys, so it’s something I’m not even worried about.

In your opinion, where the victory over Sakara could put you in terms of getting a shot at the title?
As long as I keep winning, it’s gonna come. I’m not going to get caught up in all that pre-fight pressure. As long as I’m getting impressive victories, the fights are going to demand that. My job is to put up exciting fights and win. Everything else will come by itself.

Your last fight against Nate Quarry was on a Fight Night card, and you’re a co-main event at UFC 122 in Germany. Do you feel any pressure because of that?
Not at all. I’m enjoying it. I like the attention, I like the interest. It’s one of the best things in being a fighter. Money and everything is great, but being recognized is another thing. So that’s what I want, to be recognized as a great fighter. Being co-main event is great.

Some fans are critiquing the level of UFC 122 fight card, saying there’s not enough big names on it. What do you think about that?
Well Anton, to be totally honest with you, I’m going to a local shows paying only 10$ and it’s worth every cent. As long as the fighters come to put up a great show, the fights will be exciting.  That’s how you measure quality of a fight card.  I’ve been to stacked cards, which were a snoozefest. So the so called “star power” has nothing to do with the fights being exciting. That’s the bottom line.

In my eyes, it’s the same unjustified critique coming against wrestlers.
You know, there are wrestlers that make the sport boring. I think there’s a point to look at the rules and change some things. I love the idea of having a Yellow and Red cards like they do in Japan.  If you take someone’s money, I guarantee you that they are going to pick it up. You wanna make someone fight – take his money away. And 20% of your fighting purse is a lot of money. We fight for money right? And people are coming to see a fight. So take someone’s pay and I guarantee you they are going to put up an exciting fight.

Good point. Finally, do you have any prediction for November 13th? KO, Submission or Decision?
Decision? What decision? There’s going to be a finish, my friend. One way or another. I don’t want anyone to judge my fights. I’ll look for a Fight of the Night in this one. I want the fans to know that I’m coming to fight, and make sure that this fight is going to be exciting.

Any words for Alessio Sakara?
I just want him to know that I’m honored to fight him. We’re both professionals, that’s what we do for a living and will make sure that it’s going to be an exciting fight. 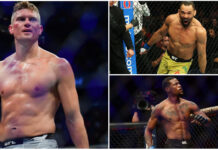